This is a live, reflective, non-commercial Conversation Series curated and hosted by AVIS at Wandering Artist.  It explores the lived experiences and expressions of artists in a unique, never-before manner. You may have seen or heard AVIS' guests performing, or you may have seen their work. But this is the first time you will hear these artists share their learnings from Life and what inspires their art.

​This Series has currently been paused by Vaani and AVIS for time/bandwidth reasons!

Please scroll down to see pictures and videos from Season 1.

The November edition of "The Artist's Soul", featured Arundhathi Subramaniam, poet, writer and seeker at The Wandering Artist! According to Arundhathi, Poetry is "verbal choreography". It is "molten". "Magma". "Patterned language." "Connected language." "Kinetic language." Her mesmerising and melodious words painted vivid pictures that held the audience spell-bound.

AVIS: I immensely enjoyed curating and being in conversation with Arundathi Subramaniam - who, to me, expanding on Osho's view of poetry being miracle, is a poet-miracle! It was a truly unputdownable evening, an authentic conversation and a great, inspired audience!

The October edition of "The Artist's Soul", featured master set and light designer Victor Paulraj! The Artist's Soul Event at The Wandering Artist with Victor was a beautiful conversation and brought out his simplicity, his genuineness and his native, intuitive wisdom...

Victor Paulraj "I don't plan anything. I have had no ambitions. Things have been happening, good things, and I have been going along with them, with Life...why tinker with anything that's working well, going well?"
AVIS, quoting Rumi, and summing up Victor's journey: "When you do things from the soul, you feel a river moving in you, a joy!"...Victor's blessed to have learnt the art of going with the flow, intuitively...a la Gulzar-Kishore-da-RD Burman's: "Musafir Hoon Yaroon...Bas Chalte Jaana Hai...!"

The September edition of "The Artist's Soul", featured

He spoke about his abundant gratitude to his Alma Mater, Kalakshetra, Rukmini Devi Arundale and other Teachers, his Integrity in not competing with a friend. The audience was amazed at his humility and amazing grace, his willingness to learn from all possible sources, his ability to innovate in dance without straying too far from the traditional art form, his sagacious thoughts on avoiding unnecessary conflicts which only leave bitterness, his enduring love for Mother Nature, the importance of self-discipline. His sparkling humour kept the audience totally engaged.

The takeaways: Humility and grace, going with the flow, choosing to never do what you don't want to do or don't believe in, absolute immersion in the art you practice....these, and nothing else, lead to excellence, greatness, longevity (he continues to dance/perform at 82) relevance and brillance!AVIS quoted Rumi: "It is only from the heart that you can touch the sky!" 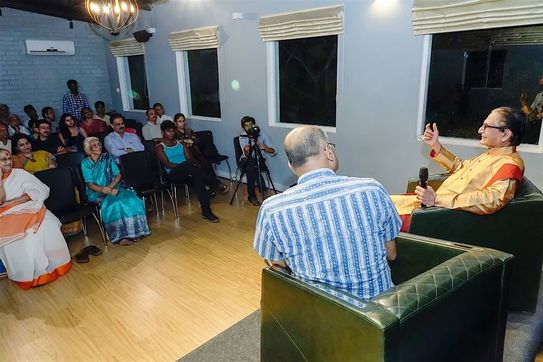 The August edition of "The Artist's Soul", featured Ace news and documentation photographer, D.Krishnan! Krishnan regaled us with great insights and interesting anecdotes from his 40-year journey as a photographer.
In summary, I shared a quote whose source is unknown: "You don't take a photograph, you ask to borrow a moment from time, from Life!" And that's what Krishnan's career has been all about! I simply loved his take that photography is first about intuition and only then about impulse.
His work ethic, his planning and his sense of what his subject may next do were so evident in each of the stories he shared. Surely, photography enthusiasts in the audience took away a lot!

The July edition of "The Artist's Soul", featured the transgender superstar of Bharatanatyam, Dr.Narthaki Natraj!

The conversation was soulful, sublime and beautiful. Her take on Life, on bliss, on her dance and her femininity are a must-listen.
Narthaki's attitude to Life perfectly fits Rumi's verse: "The ground's generosity takes our compost and grows beauty. Try to be more like the ground." She's taken rejection, insult and pain in her stride to give us the joy and beauty of her Life, her art, her soul!

The June edition of "The Artist's Soul", featured the accomplished Fashion Designer Rehane.

It was an interesting conversation at The Wandering Artist in "The Artist's Soul" Series. Rehane and AVIS talked about her journey as a fashion designer, about Life, pain, happiness, loss, compassion, empathy, staying relevant to oneself. There was Rumi too and AVIS ended the evening aptly with his lines: 'When you do something from your soul, you feel a river moving in you, a joy!".This joy contributes immensely to Rehane's inner glow, to her art! 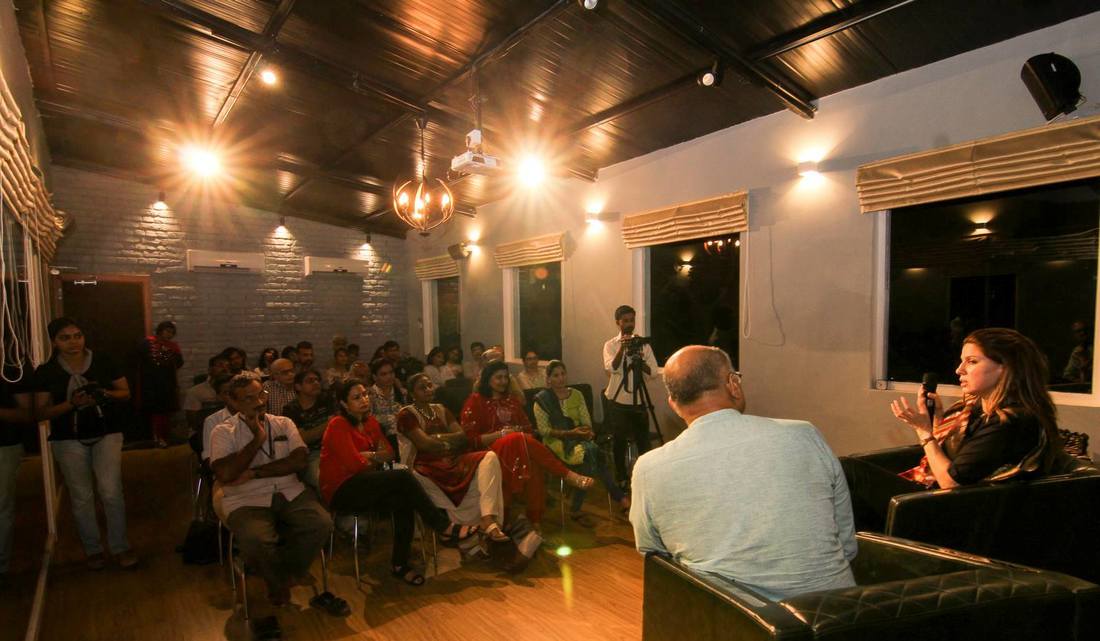 The May edition of "The Artist's Soul", featured the iconic artist and cartoonist Keshav.

"I just put pencil to paper and the drawing happens" - Keshav, yesterday at The Artist's Soul Conversation with AVIS at Wandering Artist
"When you disappear, the creator takes over and creation happens" - Osho
That sums up the essence, the energy, the spirit and the learning in this conversation with iconic artist and cartoonist Keshav in The Artist's Soul Series that Vaani and AVIS curate for Wandering Artist on the second Saturday of every month.
It was a packed house, overflowing, in fact. And everyone left inspired, happier, fulfilled.

The April edition of "The Artist's Soul", featured the writer and poet Shreekumar Varma.

He is known as the great grandson of the famous artist Raja Ravi Varma and as the scion of the Travancore Royal Family. Of course, he is also celebrated and much-feted as a writer, whose body of work spans four decades. But what inspires Shree's writing, what makes him come alive and what keeps him grounded even as his creativity soars? For the first time, Shreekumar Varma shared his personal story and what inspires him to write! 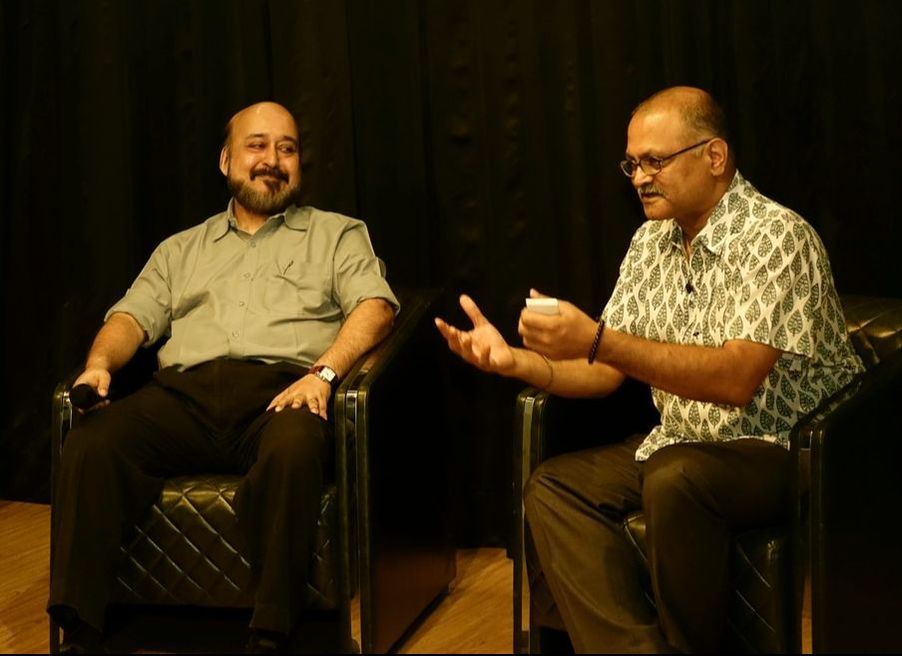 The third edition of "The Artist's Soul", featured the dancing duo Shantha and V.P.Dhananjayan

It was a packed house at Wandering Artist! People know them as the legendary dancing couple of India. They may have seen them perform on stage for 65 years now. But they spoke to me about their journey together in Life, their art and how they inspire and complement each other. They talked about how they first met in 1953, when he was 14 and she was 10; Dhananjayan shared that moment when he almost left Kalakshetra to join the Indian Army in a bout of patriotism; the duo also shared how they divide the work between them and how it is important to accept Life for what it is to be happy. It was truly a blessing to be in conversation with them!

An amazing conversation with the legendary P.C.Ramakrishna unfolded at The Wandering Artist as part our monthly "The Artist's Soul" Series on Saturday, February 11, 2017 between 7 pm and 8.30 pm.! He shared learnings from his Life's journey on what inspires him, what makes him come alive on stage and his idea of Happiness! Such erudition, such simplicity, he won the hearts of the audience!  ​​ 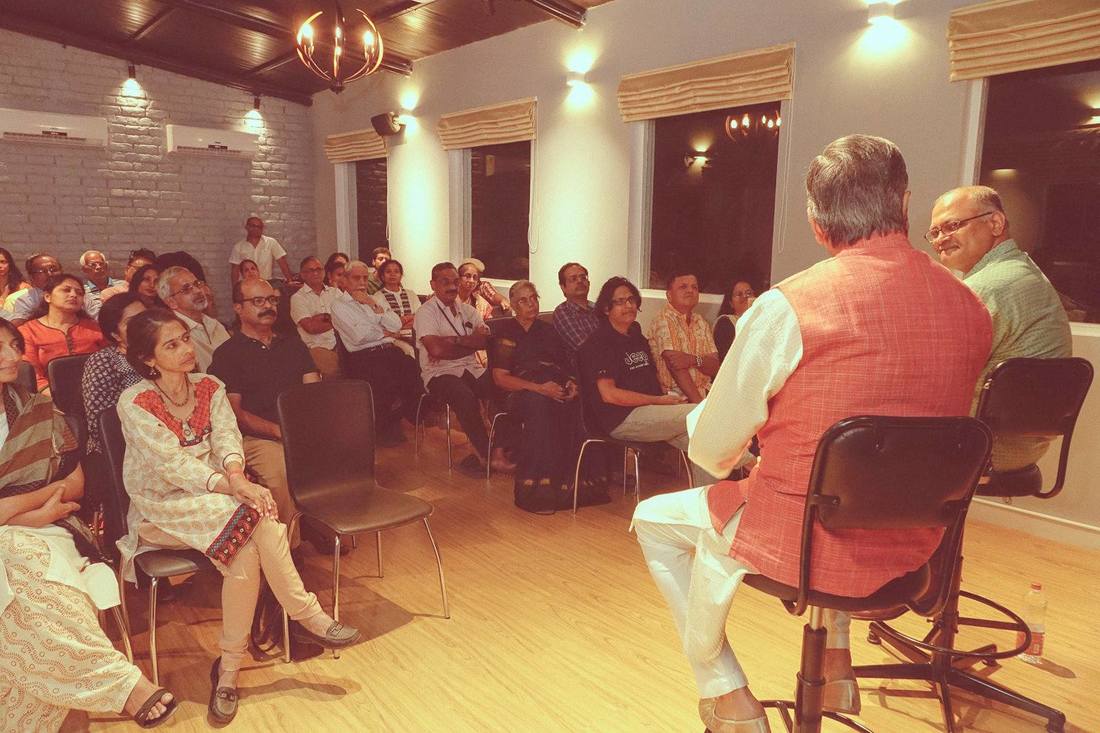 In the first edition of "The Artist's Soul", we featured Ghatam Maestro, Padma Bhushan and Grammy Award Winner - Vikku Vinayakram.

You may have surely been at Vikku's performances. But this was the first time we heard him share his Life's journey and tell us how the Ghatam has allowed him to express himself on the world stage! AVIS Viswanathan was in conversation with Vikku Vinayakram on Sunday, January 22, 2017 between 7 pm and 8.30 pm. ​​ 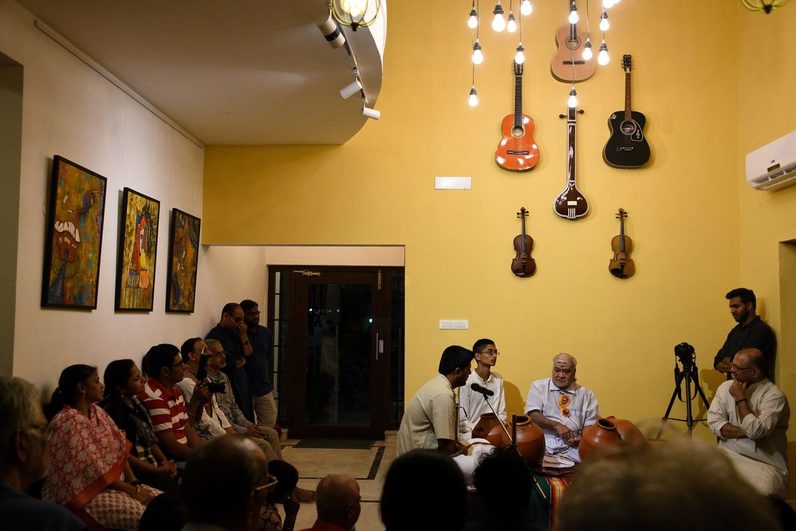